‘Thumbs Up’ endorsed by President Bush 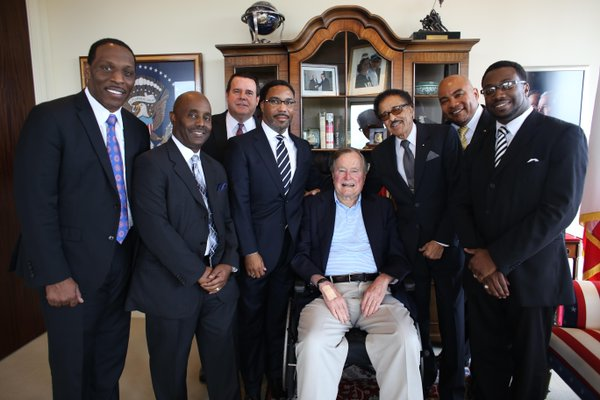 Floyd E. Lewis, Sr., presiding bishop of the Houston’s International Church Fellowship, was ecstatic about getting a significant “thumbs up” endorsement from former President George H. W. Bush for the ongoing crusade to support police officers doing a positive, life-risking job for their community.

Bishop Lewis is leading the charge in the crusade proclaiming that “Criminals are domestic terrorists, police officers are domestic soldiers.” Lewis and the leadership of his support group often voice the need to speak up for police officers amid the current critical air surrounding law enforcement officials throughout the nation.

He attributed his most recent success to “two miracles” – an unexpected meeting with HPOU President Ray Hunt and the subsequent face-to-face meeting with former President Bush in his Memorial area office.

That meeting resulted in getting the elder President Bush’s commitment to participate in a plan Bishop has for former presidents of the United States to appear at Houston’s busiest intersection, Westheimer at Post Oak, to give the “thumbs up” to police officers, firefighters and emergency first responders and pass out flyers extolling the goals of his group.

“We intend to do this by working through existing organizations to formulate community cells made up of citizens and police officers of all diversities,” Bishop Lewis explained. “People from diverse experiences ad diverse cultural backgrounds will seek to understand each other’s experiences and will work together to develop solutions.”

Lewis said the effort took an excited turn toward success with the support of Hunt and the HPOU. He went to the Union office hoping to get an appointment with Hunt but instead was warmly greeted on the spot. “I explained to him what we needed to do to get the project going and he said he would do everything to help,” the bishop explained.

Hunt was among Lewis’s group that met with President Bush, who promised to participate in the Westheimer/Post Oak flyer distribution “thumbs up” plan and also said he would enlist similar support from other former presidents as well as President Barack Obama.

Bishop Lewis said President Bush treated him, Hunt and the others in their party “like we were bush’s kids.” He said he and Bush had never met although he attended a Bush community leader meeting back during a presidential campaign. He said the president knew him by reputation and was very gracious.

“He treated me like I was his son,” Lewis recalled. “He took us into his office. I told him that there was no need of me going over the problem between police and the community. I said we were here to share the solutions with him.”

Part of the message distribution process would be a poster depicting influential leaders such as George H. W. Bush with a thumbs up for police and extending an olive branch with the other hand to symbolize the desire for peace and support of police instead of threats of violence and conflict.

“We want to put this poster in every Walmart, CVS, Walgreen’s and other businesses – anywhere we can put it. The police will take them to pastors in their community.”

Bush’s chief of staff, Jean Becker, told Bishop she would send his information packet to Obama and the former presidents. “We haven’t heard from the yet,” the bishop said but stated his belief that they would follow President Bush’s lead.

He emphasized that the effort will stress “the impossible job police have got to do” and seeks to put an end to “denigrating and ostracizing” law enforcement as if “all police are bad.” He pointed to the sacrifices made on a regular basis by officers such as HPD Officer Richard Martin, killed in the line of duty on May 18.

Anthony Madry, publicist for the Thumbs Up CHIPS program, said he is finding positive reception from Houston communities to better understand the job of police officers and support the efforts to generate a law-abiding atmosphere everywhere.

Here is a list of the goals of CHIPS.Lewis and Madry said the group will:

“Though this is not a small endeavor, it is a most necessary one,” Bishop Lewis said. “ This project is applicable world-wide.”